STRANGE AS THIS WEATHER HAS BEEN 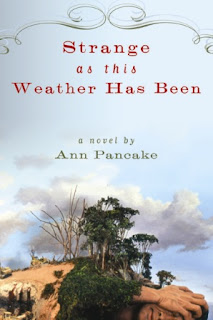 Excellent review of Ann Pancake's first novel STRANGE AS THIS WEATHER HAS BEEN in the NY Times:

ANN PANCAKE’S fine, ambitious first novel is about something simple: what it’s like to live below a mountaintop-removal strip mine. As one family negotiates the Vesuvian landscape of their wrecked hollow, its natural defenses against flooding uprooted and trashed, readers may think of the aftermath of Katrina, another man-made disaster. But until the book dips into explicit activism, this tragedy seems less the work of greedy businessmen than of a terrible old god. The most powerful passages in “Strange as This Weather Has Been” depict the lives of children in West Virginia whose only playground seems to be desolation.

In an abandoned precursor to “The Mysterious Stranger,” Mark Twain sent Tom Sawyer and Huck Finn on a visit to hell. Pancake’s 10-year-old Corey is as bright and conniving as Tom Sawyer, but his hell is no vacation spot. He lives there full time. Corey teases his little brother with an apparition called “the monkey,” an unidentified drowned thing in one of his many secret places. It’s “mostly just an open eye too big for the body, and then a kind of what must be a snout, but most of that turned away and part buried in mud.” The image of the monkey haunts the book, as alien and full of warning as the Martian skulls rolled around like snowballs by Ray Bradbury’s unthinking colonial boys.

Corey’s world is full of toxic but irresistible junk that is washed down from deluged dumping grounds; the woods are turned into a bad boy’s Wonderland. Some will be reminded of John Boorman’s film “Hope and Glory,” in which children during the London bombings of World War II played house in the fresh ruins. Pancake writes: “If you can unfocus your eyes right — and Corey can — wading the creek is like walking the aisle of a Wal-Mart made for Corey, with all the price tags saying free.”

Corey’s “unfocusing” is really a kind of wide-open perception — generously shared with the reader — in which the senses flood together and words can hardly keep up.

One character worries about “the hoarse of my breath.” A sound carries “a pleasure and a sad.” A stare isn’t blank — it has “this blank to it.”

“I could feel not only the hot wet, but also the nervous off him.” And so on.

Pancake is well aware of these quirks; she has one character reflect on the deadness of standard English words that “you must use like coins, shiny and rigid. The value of each one already fixed before you get hold of it.”

In the Corey sections, the stylistic choices don’t enter your mind. You are swept along in the escalating peril to his tough, blind innocence. Lace, Corey’s mother and the novel’s conscience, talks about the way men manage to “stay babified” their entire lives, but the truth is that every character we meet, man or woman, has an endangered child inside.

Dane, the most sensitive of the book’s many children (he is described, in the space of two sentences, as having both a “soft” and a “softness”), is given what might serve as the book’s epigraph: “I’m only 12 years old. And I’m going to see the End of the World.”

Pancake’s aim is that high. Her horrors are biblical, her compassion towering.

Her acknowledgments direct the reader to Web sites “to find out more about mountaintop-removal mining.” But aside from a few slips into frank didacticism, Pancake is true to the world she depicts, where any idea of deliverance is muted to the point of suffocation. Lace is a strong, smart but defeated woman. The Bush administration’s recent push for looser restrictions on mountaintop removal would come as no surprise to her. Lace’s battle with the mining company blurs into a kind of existential endurance: “The best way to fight them is to refuse to leave. Stay in their way — that’s the only language they can hear. ... Listen here, it says. We exist.”

Another character, who has escaped the hollow, still carries the mark of that stubborn and inconvenient existence: “In Baltimore or Detroit or Cincinnati or Cleveland or whatever city, it’s not just a matter of keeping down the dirt. ... It is a matter of you yourself being perceived as dirt.”

Pancake — she is a distant relative of the short-story writer Breece D’J Pancake — makes her point in “Strange as This Weather Has Been” in a powerful, sure-footed and haunting way: People aren’t dirt. But they know when they’re being treated like dirt, whether in the Lower Ninth Ward or the hills of West Virginia.

Review by: Jack Pendarvis’s most recent book is the story collection “Your Body Is Changing.” He is the visiting writer in residence at the University of Mississippi.