Guilty of Over-Revising & Halloween, the Day After 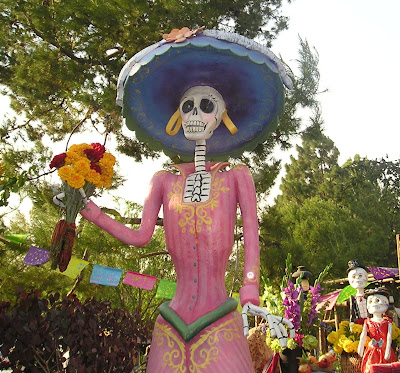 Well, I've KitKatted and Junior Minted my way through Halloween. We are taking down the decorations and I am wishing Halloween lasted more than one night.

I have been working on a poem for the last 3 weeks. I have been revising it and carrying drafts around with me. Yesterday when I went to make even more revisions (the poor poem has been arranged and rearranged numerous times), I accidentially pulled up a much earlier version of the poem and I realized that my earlier draft, in fact, the one closest to the first version was so much better than what I had revised the poem into.

My revisions had basically sucked the energy, the spark from the poem.

So what did I do? I tossed the super-revised-a-thousand-times version and went back to work on draft two. The poem is now complete and better for it. I keep thinking had I not accidentially pulled up the wrong version, I would be working on a poem that wasn't as strong and believing my revisions had made it better.

I have been guilty of over-revising many times. Sometimes I think my first thought is not necessary our best thought, but can many times be closer to the source. And while mostly my poems come out ragged around the edges, the earlier drafts still carry the most energy and that "unnamed" feeling in a poem that somehow adds a little sparkle, a little something more.
Email Post