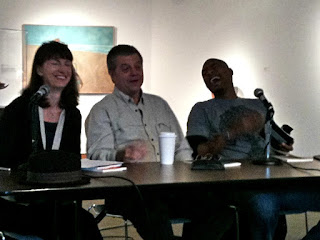 Below are my notes from interview of poets Terrance Hayes & Robert Wrigley by Elizabeth Austen (author of The Girl Who Goes Alone).  If something is in quotes, it is a direct quote from the poet or Elizabeth.  If you see anything in brackets [ ], it's just to help you know what something is in reference to and/or to complete the sentence so it's in context.

I think that is about all you need to know.

Here are the details--


I arrived at 9:20 am to the NW Museum of Art where Elizabeth Austen was interviewing 2 very well-known poets, Robert Wrigley and Terrance Hayes.  I like Robert Wrigley, but I am there to see Terrance Hayes as I love his book Hip Logic and he's one of my favorite poets.

Elizabeth begins by saying she has never interviewed 2 poets at the same time before, but afterwards, we discuss that it worked out quite well.

While I know there was a lot going on at the festival, I felt a little bad for anyone who missed this session as it was one of my favorites.  Elizabeth did a great job of engaging both poets, connecting their work, and still allowing time for a poem or two to open up the discussion.

Terrance began by reading "Lighthead's Guide to the Galaxy," (from his new book Lighthead) which he called a "proem" (a pre-poem that comes before the section and all the poems in the book.  The poem was fantastic and made an incredible "proem" as it Elizabeth pointed out that it "prepares your ear for all the themes you'll hear later throughout the book."  Terrance said a lot of his book is about "getting older and still being a poet."  He also pointed out that his books get "stranger and stranger."

Elizabeth brought Robert Wrigley into the conversation who said he has been working on making "more complex books."   And in regards to his new book he said, "I do not care what any of the critics have to say, I'm also militarily uninterested."

He said that while he was in Italy (and I think it was the Rockefeller Foundation in Bellagio, Italy) in a place with many other artists from around the world that he realized, "the rest of the world was looking at us as Americans and wondering how our country had gone so insane...."   He said he set out to make a book that "captured our country."

Regarding writing, Terrance said, "I haven't finished a poem in a month, but this is a good time because I'm writing."

He said that he doesn't write poems to propel people into action but that they are an "investigation of one's [my] own responsibility...my poems are trying to move me into action."

In writing a poem, Terrance said that, "For me, the poem is always in charge."  He talked about changing facts, details, etc. to get to the "Truth" of a poem.  He said, "I think it's completely fine [to do that], but I know others don't..."

He also spoke about how much he loves music in his poems.  He said, "The real challenge for is not trying to sing all the time [in my poems]."  His advice to his students?  "There are as many ways to succeed [when writing a poem] as there are to fail."  I took this as meaning not to feel stuck into believing there is only one way to write a poem, there are many.


Wrigley quoted Richard Hugo about remembering your readers are smarter than you (the poet) and "you need to leave a certain amount of connecting to the reader."

"I always tell my students that writing a poem is like making a quilt.  When you don't know what comes next, you go up to the beginning of the poem and pull something down, you make a stitch. . ."

I can't remember why he said this, but I wrote it down because I thought it was lovely--

"You look back at your own innocence and it's beautiful and pathetic."  I think it had to do with our lives growing up, but I can't quite remember.

Another quote in regards to how he writes:

"If I have a sound that I'm particularly fond of in the first line, I try to pick up that sound in the 3rd or 4th lines...sometimes that [a new word with that same sound] will surprise or challenge me."

He said, "You don't write poems because it's easy."

He also said, "We have to use the same language that memos are written in, that sale flyers are written in...we need to move towards music to reclaim it [our language]."

When Wrigley reads poems he says that you "take something from every poet you read that is useful to you."

Sometimes he plays his guitar if he's stuck on a poem because he "needs to have some other way to think about what I'm going to do."

In regards to what is wonderful about poetry (and not prose) he said, "we get to shape language; we get the right margin."

Other things I learned--

Terrance Hayes is also a visual artist and the images on all of his books were done by him.

He also said that he loves these "early moments" of his book because published and talking about them because it's exciting for him because these conversations help him learn more about his own work. He says he's always curious what readers get out of his poems and it allows him to see his own work in a new way.

Robert Wrigley's poem "Exxon" was originally taken by a smaller journal until his wife told him to send it to Paul Muldoon at the New Yorker where it was eventually published.  He also read the poem "Exxon," which is an incredible poem.
~

I think Elizabeth did an excellent job as an interviewer and her questions really opened up the conversation between these two.

She said that there were many common themes between their two books (Earthly Meditations: New and Selected Poems by Robert Wrigley & Terrance Hayes' Lighthead ), but both explore the question of "what does it mean to be a man?" along with other political and familial themes.

I left that discussion wishing it had been taped as I would listen to it again.  And again.
Email Post
Labels: poets skagit river poetry festival