You're Not Crazy, Your Television Is! 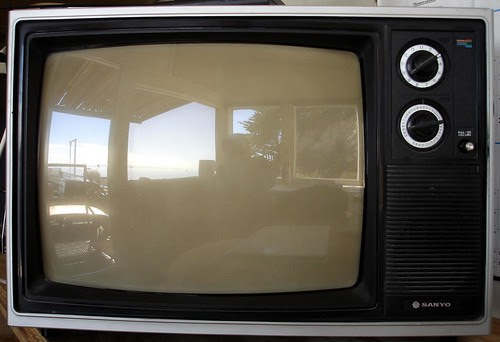 I took a short vacation with my husband to a favorite resorty hotel for a couple days to be away from huge house project.  My goals?  To read, to nap, to watch the water, mountains, and herons.  It was luxurious and relaxing, except for one mistake I made-- I turned on the television.

A year ago, I canceled our cable so we only have the basic stations, plus Discovery & Hallmark (the two channels they throw into the mix when you buy basic cable--my guess is that this is because no one watches the Hallmark channel, but I digress...)

I canceled cable it for a couple reasons-- the first was because more than not, I'd come into the house and the cooking channel was on and hear, as I walked into my own home, the first greeting was by Racheal Ray or Paula Dean.  Not that I do not like either of these two ladies, but since I don't live with them, I became annoyed hearing their voices the very second I entered my home.

Two-- The Cartoon channel was turning my brain and my child's brain crabby patty. (Those with kids, will get the Spongebob reference in that one.)

Three - The Midriff Stations-- this is what I began to refer to the walk up the channels between The Daily Show & the Home and Garden Shows.  MTV, VH1, MTV2 and I'm not sure what else was in the mix as I used to flip past it before I saw some girl on girl action, someone screaming at someone else, or anything else that has nothing to do with music videos.

Four-- Even with all the channels we had, there was nothing on TV.

I gave my family a budget, told them they had 3 months to look for the best deal where they could get the stations they wanted for the amount I was willing to pay ($45 a month), then to go for it.  But an odd thing happened, no one bothered to look.  So when the 3 month deadline came up, I canceled cable.  And another weird thing happened-- no one even missed it, and within a week, that Food Network time was filled up with something else.  Also, now we only pay $18.95 a month for cable-- love that!

But on the way to the Oprah Channel, I flipped through all the other channels and realized how much these other shows create a sort of frazzle in a calm day.

Things I saw that I do not miss-- reality shows about celebrities including Gene Simmons (how long has he had a show?!)  Gene Simmons should not have a show because he is a slow-talker and that doesn't make for good TV. But in all these shows, each could have been called "how I misbehave for the tv cameras" or "the cameras are here, let's be cranky and/or say something that should be bleeped out."

Still, I can see why people why reality shows are watched-- you kind of "know" these celebrities and you get this weird (though skewed and edited) look into their lives.  Plus, it's bubblegum entertainment for the brain--let's watch the Kardashians, the Osbournes, the Simmons, to realize how less screwed up our family is!  I get that.  These were not the shows that made my head hurt while scanning through, it was the news shows.

If I could rid this world of one thing to make a positive difference, it would be cable news.

They do not only beat a news story with a stick, but they also skin it, hang it on the line, wear it as a cape, and wrap themselves and everyone else around them in it.

The worst channels are the one that have so many things around the newscaster's face from stock quotes to weather to breaking news to logos to lines of text that is probably just added for effect, it made my brain hurt.  There is so much writing and images on the screen, the newscaster looked as if she was picking out between the information overload.

Television isn't bad.  As someone who still quotes from Designing Women, will kick back and watch a couple episodes of Antique Roadshow, who watches Amazing Race with her family every week it's on, I definitely do not want to be one of those people who when you ask, "Did you see the last Grey's Anatomy?" responds with a holier-than-thou: We don't watch TV (instead of a more polite, "No I didn't.")

But I do want to suggest that too much television and the image and news overload, might be screwing up your inner calmness.

I realized it when I saw the lady's face hovering above three lines of stock quotes and breaking news, that she was like the Wizard of Oz, floating head, dishing out "important" info, but pull the curtain away and it's all for ratings.

It's all to take away our own creativity and time.

It made me realize once again, we are each in charge of what we bring into our lives.

And you might think you're frazzled, anxious, overwhelmed with not enough time to write.  Consider the television.  Your life is just fine as is your brain and your emotions.  You might just need a detox from the screen.

And as I said, I haven't given it all up, just the garbage stuff like cable news and shouting families.  I mean, our own families are nutty enough, must we get craziness from people we're not even related to?

I guess I will always be thankful that television comes with an off button.