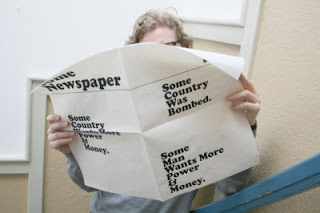 It's been one week and one completed septic system & drain field since I last confessed.  I been caring for my friend's chickens while she was away.  Each day, 2-3 eggs.  Magic.

But now it's time to confess, my mind is blank and I worry if I have any confessions to share?  I must.

I confess this morning I checked CNN to see if the stock market had continued to decline and I saw this "Worst Days of the Obama Presidency" and realized again why I dislike cable news-- they have short attention spans.  Wasn't he just a hero for for the Osama bin Laden kill?  Whatever is in front of our face is our anxiety.  Weren't we freaking out from the nuclear plant Fukishima?  What happened to that problem?

This is my cranky self saying we there is always something to fear, something to throw in our faces and saying, "The world is coming to an end" and "The country is in a recession" only to be followed by an ad from Sprint telling me I can make 3D movies on my phone.

Is it just me or is there a total disconnect from what the cable news is telling is and what corporate America is selling us?  I swear, if the news is as bad as they say, I don't think I should be making 3D movies, but maybe buying canned food instead.

I confess my favorite canned food when camping is chili.  But with cheese & sour cream.

I confess I want to read this book:  Whiter Shades of Pale: The Stuff White People Like, Coast to Coast, from Seattle's Sweaters to Maine's Microbrews

- My friend recently read it and said it was hilarious.  I know she said in one of the books, "camping" and having "gifted children" were mentioned.  I would bet that loving Trader Joe's is mentioned (or should be) as well.

I confess I'd be terribly upset if they ever discontinue Trader Joe's honey-sesame almonds.  These have become my favorite daily snack.

My other favorite Trader Joe's foods are:  wasbai peas, lacey cookies, lemon cookies, yellow curry sauce, and mango chutney.  These are the strange staples in my home.

I confess I'm not currently thinking about breakfast after that last confession.  Time to break open a box of Total cereal...