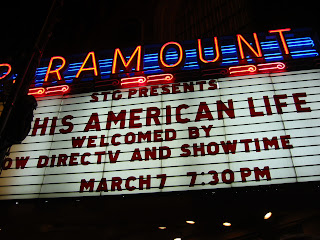 Last night I went to see a live taping of This American Life on stage at the Paramount in Seattle. The crowd was hugenormous and you would have thought we were at a rock concert (or should I say trendy alternative band concert). I am a huge Ira Glass, NPR, This American Life fan, and when I was telling people I was going to see This American Life, people didn't understand what it was, so I'd say, "NPR" and they'd say, "Oh, Prairie Home Companion."

The people at the event didn't look like your regular Seattle NPR listener (fleece, sensible shoes, NPR logo vest from pledge week), but a hip crowd of late-twenty to forty-somethings. The group consisted of some possible pseudo-intellectuals, ex-English majors, young democrats, and artists (wannabes and the real thing). Women paid enough attention to their appearance so that they were pretty, but not too made up. Men were tidy, wore dark coats and black-framed glasses (like their hero Ira Glass, but with a shape that is more stylish in Belltown.)


In this taping of This American Life the show was about "What I Learned From Television." The show featured stories from David Rakoff, Dan Savage (from The Stranger), Chris Wilcha, and music from a great band whose CD I know own--Mates of State. The show was hilarious. It was also interesting to watch a radio show being taped, thogh I know how uninteresting this may sound. We noticed when a line or word was said poorly, the speaker just said the word or line again ("I'm Ira Glass and this is....") and later, magically, it would be added in--such as when Dan Savage had his pet poodle "Stinker" come out on stage as part of his essay, he had a to later add, "For the listening audience, what has happened is that a poodle has just walked on to the stage..." Which was later changed to "my poodle" as it didn't really make sense to have a random poodle walking around the stage.

A section of the show had to deal with the new TV series that will appear on Showtime this month. They showed clips of it. I'm just new to basic cable, but have considered getting Showtime just to get my visual fix of TAL. I believe I have listened to every TAL show, I have worked way back in time through my computer, listening to a show late at night on my computer as I clean my office. I was hooked the first time I heard it--I believe David Sedaris was reading, but I'm not sure, David Sedaris is always reading, I know it was before 9/11 because I remember all the 9/11, Iraq stories that came after. What I remember is that I was just taken, just as the Swing Years and beyond takes me away, TAL is a sweet retreat from my ordinary life into the ordinary lives of others. It's probably the best storytelling around...storytelling with music.

Last night, I got a better idea how it's done. I saw how Ira Glass moves his arms in odd ways while he talks, how he scratches his head, and flips a paper. The whole event went almost two hours and even from our seats which were probably the worst seats in the house--the very top back wall on the 3rd level in the corner, though technically, I was six seats over from the corner in row Z--the show was fantastic. Though I'm just trusting the guy at the desk with the arm movements was Ira Glass on stage because my view, it could have been anyone in a suit.

Afterwards, we left in a sea of hip strangers and paid for our parking in a sea of hip strangers, and got on a ferry with a bunch of people in fleece to return to our world of corduroy and wool sweaters, down vests and breathable shoes. On the ferry we talked different kinds of mixed drinks and Girl Scout cookies. We stayed in our car and the windows steamed up. N said she was getting emails from the universe--I needed clarification (the solar system or the *universe*). The *universe.* We wondered what kind of emails we'd receive if the solar system wrote emails--we decided Pluto would have the most say being kicked out of the top nine. And we argued if Neptune was Uranus' twin (Interplanet Janet said so).

We drove home and I felt better for being there.
Email Post