April is the Coolest Month... 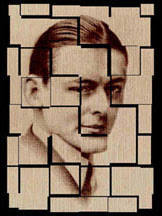 I think that's what Eliot really meant to say. Welcome Easter, the end of Lent, and National Poetry Month.

I really am going to write a poem a day. And maybe I'll post a couple here--briefly--just to make sure I keep it up. 30 poems in 30 days. Reminds me of those weight-loss programs except in this case, we're gaining words, verse, stanzas.

I've never been one to wait for inspiration to arrive. I'm impatient and life is short, if I had waited for inspiration I'd probably only have about 20 poems. Or maybe inspiration can be the deadline, the goal, the need to finish something and make it good. Inspiration as revenge, as success, as the inner struggle with something bigger than you thought.

It doesn't matter what gets us writing, it only matters that we are. We need to have something to revise. We need to sort out the thoughts that circle or heads. We need to let someone know we have fallen in love with them or are ready to leave. We need to shake things down, calm things up, explore old territory as new territory. We write because we cannot not write.

* Think about the poems you love and try to write them as your own this month.
* Think about the poems you hate and write a better poem.
* Write a poem from the end to the beginning.
* Take an old poem, cut up the words and phrases, and reorder.
* Find 3 old poems that you don't like or can't finish and write down your favorite 10-15 words from those poems to use in a new poem.
* Write in a way you've never written.
* Write a sestina, a villanelle, a sonnet.
* Rhyme something.
* Steal a title of a news article and use it for your poem.
* Break a line in a place that feels terribly uncomfortable for you.
* Try to write a poem in the shape of something.
* Start a poem with the last line of someone else's poem
* Write an acrostic poem
* Hide your name in a poem
* Write a ghazal
* Break an old habit of something you do in a poem
* Write a poem Flush Right
* Write a poem with pencil if you normally use your computer or vice verse
* Write about a sad childhood event as if it happened to someone else
* Write a poem then remove all your adjectives.
* Write a poem with all those extra adjectives you just took out.
* Write a haiku
* When you are stuck, begin with "I remember" then edit that out later.
* Write an ode
* Write a poem in a letter to your favorite poet
* Write a poem using words from another language as well as English
* Write the poem you don't think you should write
* Write the poem you wouldn't want a relative to read
* Write the poem that embarrasses you
* Write a list of images and fold down your paper. Now write a list of questions. Match them up and write a poem
* Write what you think is the opposite of a New Yorker poem
* Use the word "seismic" in a poem
* Read a book of poems, then write a poem in the voice of that poet
* Start your poem, "This is the last poem of the month"