What's @Klout? How I raised my score & why I received free #MOO Cards #socialmedia

For the last couple months, I've been trying to figure out what Klout is.

When I first went to their website, it said I had a "Klout Score" of 36.  I had no idea what that meant, but I could see that it wasn't the lowest score nor the highest score.  But what was I being graded on?

What Klout says on it's website is that it believe "Everyone has Influence" and "Our goal is to help you understand and leverage that influence."

I learned it uses social networks such as Twitter, Facebook, Google+, etc. to measure your ability to reach and/or influence others and then Klout gives you an overall score.

Because I had a relatively low score, I decided to challenge myself to raise this score.

I wasn't sure exactly what to shoot for, but I realized you're invited to "Perks" (something I'll talk about more below) if you have a score over 40, but being a competitive person, I decided wanted to shoot for a Klout score over 50 and figure out how to do it.

As I said, one reason for choosing this number is that I noticed there were these things called "Klout Perks" where you could get free items (from business cards to $10 at a sports store) or be part of things.  To be eligible, you needed a higher score. I would see these perks and all of them said, "You are not eligible." (Gee, thanks for giving me a low score then keeping me out of the prize club too.)

So I added the Klout website to one of the first webpages I checked in the morning and they gave me perks (such as +K, which were Klout points I could give other Klout users I liked such as Collin Kelley, Jeannine Hall Gailey & Michael Wells.)  And usually, whoever gives me Klout, I give them Klout back in that good karma sort of way.

What I learned was, checking in to see my Klout score daily, made me use Twitter more and Facebook (because if people share your tweets or respond to your posts, your score goes up...)  This fascinated me.  And I loved that I could see it rising, though honestly, wasn't really sure what would make it go up.

I don't take part in Google+ (honestly, it confuses me), but I have a Twitter, blog and Facebook account.  I began to use Twitter more, tweeting articles I found interesting, using it in ways I hadn't really-- like engaging more in conversations with others and when I found things other writers and creatives would find interested, I tweeted them.

In the last few days, my score took a big 4 point jump and have no idea why.  I had a few people retweet me and a few Facebook posts people responded to, but nothing huge.

Here's my page on Klout if you want see what it looks like.  Each person who has connected with Klout get their own page with information created for you.

But what does this mean?

I'm not sure except I have finally earned a few perks from all of it.

My favorite perk being Moo Cards (which are the coolest business cards ever).  I have known about Moo Cards forever, but never bought them because they were $20.  I know, that makes me sound a little cheap (I prefer thrifty), but I just never wanted to buy a set and be disappointed as I had only seen the online. 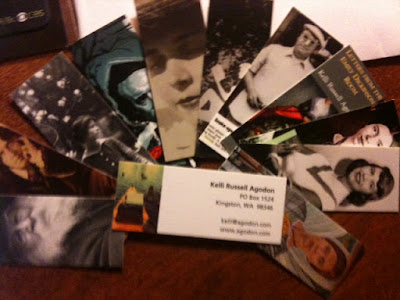 I chose image of my book and other writers for the backside, then the front is just your basic information.  They are about half the size of regular business size.  I ended up just paying shipping for them ($6).

And if I understand this correctly, I can send this same benefit to you with this link.  (let me know if this works or not, if you choose to do it. I don't get anything out of it, I'm just still trying to figure out the point of Klout.)

So if that works, that's cool. 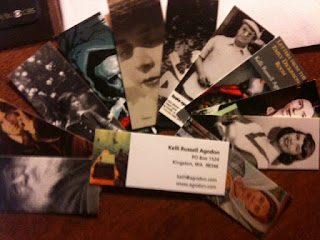 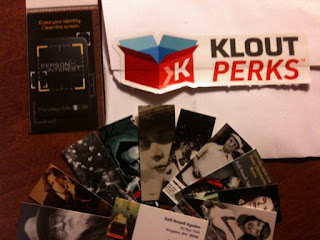 I also received this Person of Interest TV Show Screen Cleaner (that they mailed to me at no cost).  And I think 10 people can receive these too.  It's kind of weird because Person of Interest is not my type of show, but I like the cleaner and I maybe getting a surprise in the mail--okay, I liked getting a surprise in the mail, I am a twelve year old girl.

Also, when you're signed into Klout, you can search for people who are "experts" in certain areas, and I like being able to find new people on topics I'm interested in such as creativity, books, authors, etc.

Klout also has decided I'm "influential" on a few things-- poetry, writing, eBooks, spoken word, books, libraries, and coffee.  Coffee?  That one made me laugh, but I am in Seattle so I still think Starbucks is a good thing.  Plus, I do have a beautiful large cup of coffee every morning, and I'm guessing I must put that in my blog or status update more than I thought.

The other strange topic to me is I'm influential about economics.  Economics before editor?  This is the part of Klout where I'm just not sure where they grab their info from.

As for my final thoughts are that I'm still not 100% sure I even get what Klout is or why it's important.  I wonder what they will do with this info, of knowing who is influential in what?  If you have a high influence in coffee, will coffee companies want you to try their coffee?  Or does it just mean, I'm highly addicted to caffeine.

Whatever it is, Klout does have a fun element to it as well as one that can help you find other interesting people or topics, and there is satisfaction of the score going up... of course, what goes up, must come down...so I'm guessing as this experiment comes to an end (and as summer comes and I'm not as active online) my score will drop.  And that's okay.

I will stay on Klout and as I learn more about it, will let you know.  I'm hoping one day to get a better understanding of lists and doing more with those.  And maybe use it more as a tool for helping me research topics I'm interested in.

In the end, I doubt my Klout score will be featured in my obituary, so it's something to know is out there, but it's probably not something that will change your life too much, with the exception of perhaps, some new business cards.