It's been a week, a roadtrip, a womens' writing retreat and 4 days at the Sylvia Beach Hotel since my last confession.

In the last 4 days, I have been baptized with Trader Joe Pomegranate Sparkling Water in a Prius, looking out the window of the Emily Dickinson Room, considering Mark Twain's bed and clawfoot tub, spent numerous hours with women poets and feel blessed to have met so many incredible people.

I confess I feel inspired this morning.  Susan Rich and I just returned from our first ever Poets on the Coast in Oregon, where we worked with 18 women poets--the energy and creativity of working with writers in such a literary atmosphere still glows around me.

When we first decided to create Poets on the Coast, we thought it would be a great way for us to help women writers find time in their lives to nurture their poetic selves and leave the everyday into the magic of the Sylvia Beach Hotel.  What I didn't realize is how much I'd get out of meeting such incredible women and spending the weekend talking about creativity and how to continue keeping it in our lives once we left the retreat.

I confess I forget how much I LOVE the Sylvia Beach Hotel.  It's funky.  It's old.  It's on the beach. And every room is after a new literary artist.  They have replaced the Edgar Allen Poe room with J.K. Rowling.  I guess while everyone *loved* the Poe room, but no one wanted to sleep in it.  The pendulum hanging directly above the bed was apparently too much for many (it was a creepy room).  Now visitors sleep with an owl looking at them than a stuffed raven and dream about Harry Potter.

I confess the best thing I heard this weekend was from at least three women told us that this weekend changed their lives.  And in that good, things-won't-ever-be-the-same, positive, inspired way.

One of my favorite parts of the retreat was meeting one-on-one with the participants and helping them with their poems or goals or their individual artist lives.

I confess there were many hilarious moments and fond memories I have from this trip.

One being, in the car on the way home, Susan while trying to pry our snackbag from the backseat caught the lid of the pomegranate sparkling water on my seat offering a random champagne toast/fruity blessing/dousing all over me.  The funniest part though was how  innocently oblivious she was to how much water went shooting out of the bottle-- looking at her side of the seat (which wasn't wet), "Oh, it looks as I only got a few drops on my sweater" completely unaware I was soaked and sitting in a small pomegranate sea.

I confess after much talk and hearing the responses from the women who joined us... Susan and I booked the Sylvia Beach Hotel and marked our calendars for 2012 as we will be planning the second Poets on the Coast: A Retreat for Women Writers for September 7-9, 2012.

It was a ton of work to organize this, but it also was a ton of fun and incredibly satisfying to hear how we made a positive difference in people's lives. 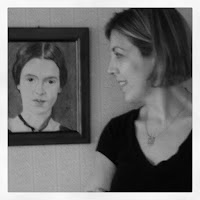 And while I stayed in the Emily Dickinson Room this year, next year, Emily's room will be open for another poet to experience...

I found a shell I had written the names of all the women writers I had traveled still in the desk from 2008.  I left a copy of my book in the nightstand.

On the night before our big dinner, after Susan and I had learned some incredible news (some I'll be sharing with you later this week!), the beaded dharma bracelet I always wear broke and the wooden beads fell onto the bed.  This is a bracelet I wear as a reminder to hold faith not fear within me.  I wear it to remind me I have a choice whether to live in anxiety or not.  The bracelet reminds me live in the moment and not in the future, or in my head, or in my fears.

And there it was, broken on the bed.

And I realized, this was full closure for me.  That part of my life is over.  I will probably still feel worried and anxious again as I'm human and I'm Kelli, but I have ended that chapter of my life--that book as been written, I am done with those poems. My Emily Dickinson self, the one who keeps herself safe in her room (literally and metaphorically) doesn't speak as loudly as she once did nor take up as much space--what was once a presence is now merely a shadow.

I put the beads from the bracelet in the drawer with the shell from 2008 and closed the door.

I'm thinking about the Mark Twain room next time...

Twenty years from now you will be more disappointed by the things that you didn't do than by the ones you did do. So throw off the bowlines. Sail away from the safe harbor. Catch the trade winds in your sails. Explore. Dream. Discover.  ~Mark Twain